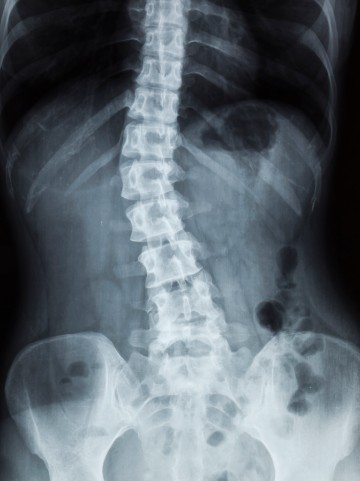 What exactly is scoliosis? It's a disorder where the vertebrae have moved in a side-to-side pattern forming an "s" or "c" shape in the spine. In layman's terms, it is a curving of the spine. While scoliosis can affect both men and women, most cases often occur in girls and the curvature of the spine worsens during growth spurts.

Did you know that many grammar schools and middle schools test for scoliosis so that it may be caught early on in life? If caught early enough, a chiropractor may apply a brace to the adolescent. While the brace does not cure the scoliosis, it will, however, help to straighten the spine and can be adjusted with growth

How Can You Tell if Someone Has Scoliosis?

Take a look at an adult or a teenager. A regular spine is pretty straight looking. Someone with scoliosis has a spine that is not straight at all. The vertebrae have shifted and, depending on the degree of shift, can cause quite a deal of pain if not treated early. The main way to tell is that one shoulder or hip may be raised higher than the other.

Can a Car Accident Cause Scoliosis?

Unfortunately, scoliosis happens all the time without rhyme or reason and sometimes does not have a known cause. If a person has never been checked for scoliosis and has a car accidents and then shows signs of scoliosis, one may infer that the car accident caused the scoliosis. Though, more often than not, the scoliosis has been with the person and had not yet manifested itself in a person, yet due to the severity of the vehicle accident, the scoliosis may have caused a curvature after the accident occurred. Chiropractors tend to use a variety of back braces that keep the scoliosis patient from accidentally hurting himself in his everyday life. And as the degree of the curvature decreases, the ability for a normal spine is closer to be realized.